The 29th JACT Latin Summer School marked the beginning of a new era, with David Stephenson and I doing our best to pretty much pick up where Tim Wheeler left off.  After all, ‘if it ain’t broke, don’t fix it’.  Once again, over 100 students, divided into 11 teaching groups, turned up on the last Monday of July to dedicate themselves to ten days of intensive Latin study.  People continue to want to pick up Latin at a later stage and we had two beginner groups again this year.  The course also continues to be popular with those who are about to do PGCEs or who have some experience of Latin, but would like to refine their skills.  For these post-beginner but pre-A Level groups we were able to invest in several new Latin readers.  As usual the age range was wide, with the youngest student being 15 and the oldest being 59!  About a quarter of those on the course were from the state sector and there were a considerable number of university-level students this year.

‘I think it would be very difficult to make the Latin Summer School better!’

Our inaugural year would not have been so easy, had it not been for the fantastic staff we had helping us.  There was a healthy mixture of veterans and newbies: Francis McIvor and Professor Matthew Leigh, both long-term friends of the summer school, rejoined the team and their experience and familiarity with the summer school was a great help.  Sophie Potter and Sarah Quick returned for the second year in a row and Will Ford rejoined us again after a three year break.  It is equally important to have fresh teaching talent and we were very lucky to introduce Ailsa McDermid, Sara Brankin, Lindsey Harris and Luke Bastin to the summer school team.  Naturally, even with two directors running the show, life would be very difficult without the assistance of a directors’ assistant.  Charlie Paterson not only managed to keep himself calm and organised in a storm of requests and demands and last minute panics, but also played the role of Pseudolus in the staff play with such aplomb that David and I wondered why we had been so worried about finding someone to take over Tim’s favourite (and only) role.  Carrying on a policy started last year by Tim, we also ran both basic and advanced grammar clinics, including lessons on advanced and basic scansion, oratio obliqua, and prose composition.

‘It was tough but I really improved.’

Returning tutors were not the only ones to support us in our first year as our programme of lectures was started, as is traditional, with a visit from Anthony Bowen and his talk on the ‘Sound of Latin‘.  Momentarily, things then got a bit dicey when one of our speakers had to cancel at the last minute due to swine flu.  Thankfully, Professor Leigh took one for the team and delivered not only one but two excellent lectures: ‘Homeric Epic and Roman Destiny‘ and ‘Roman Poets and the Roman Calendar‘ respectively.  Both were hugely entertaining, informative and very well received.  The study of Classical reception continues to grow in popularity, and Dr Joanna Paul of Liverpool University delivered a fascinating lecture on ‘History, Fiction and Latin in HBO’s Rome‘, which as well as being hugely interesting in its own right, also led to the revelation that Matthew himself had written some of the saucier Latin graffiti used in the series.  Saturday night is traditionally “Film Night” and Hot Fuzz has now overtaken Gladiator in terms of popularity.  Another member of the home team took to the speaker’s platform on Sunday night as Ailsa McDermid delivered a lecture on ‘What do Roman women get from worshipping Isis?’.  Ailsa is one the newest members of the tutor and lecturer team, and her talk certainly lived up to the very high standards set in previous years.  It was very well-received by the students, who enjoyed looking at an aspect of Roman culture which doesn’t get that much of an airing outside of the second book of the Cambridge Latin Course.  Last, but by no means least, Stephen Bird, Head of Heritage Services in Bath, a faithful and long standing friend of the summer school, delivered a lecture on ‘Roman Bath Rediscovered’.  On top form as usual, Stephen was both as entertaining and as interesting as he always is. David and I would like to thank all the speakers again for delivering such a great variety of lectures at such a high standard; it really was an excellent programme.

Other than our programme of lectures we once again provided our students with the opportunity to go on not just one excursion but two.  Despite appalling weather throughout most of the week, the Sunday of the Caerleon and Caerwent trip dawned and remained clear and was enjoyed enormously by all.  As in previous years, we also took two coach loads of students to the Roman baths in Bath, where we were again privileged to hear the expertise of Stephen Bird and his team of guides in our own personal tour of the site.  It is always a very impressive museum, which never fails to entertain, educate and innovate.  Finally the last night of the summer school arrived and we celebrated it in the customary style with the staff play (this year it was ‘The Swaggering Ghost’) and the fancy dress party.  I have to admit that I was more than a little concerned about how we were going to pull off the staff play without Tim’s juggling and musical contributions, but I think we just about got away with it, thanks to Francis’ sublime Hysterium and Charlie’s Pseudolus.

‘It was perfect, I’ve never felt so at home!  The staff play was the biggest laugh I’ve had!’

In conclusion, I would like to thank the continuing generosity of our sponsors, as we were once again able to offer support to all those who needed financial assistance. The summer school wishes to record its gratitude to those sponsors whose continuing generosity helps to make it all possible: The Classical Association, The Society for the Promotion of Roman Studies, The Jowett Copyright Trustees, The Craven Committee, University of Oxford and the Faculty of Classics at the University of Cambridge.

‘Never have I made more really close friends, and felt such an improvement in my work in such a short time.’

Next year’s summer school will be held on 26th July-5th August 2010 at Wells Cathedral School, Somerset.  For further information either email aboyt@norwich-school.org.uk or find our brand new Facebook group: ‘JACT Latin Summer School‘ where you can see more photos from the 2009 summer school.

Co-Director of the Latin Summer School 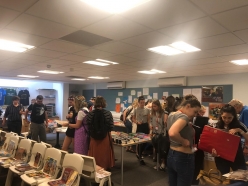 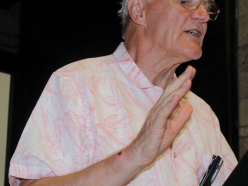 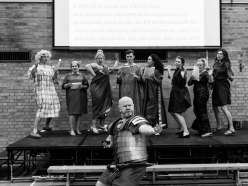 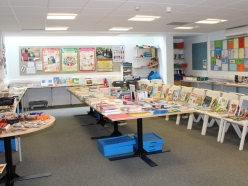