‘Who’d have thought being so geeky could be such fun!’

This year we once again saw numbers rise to record levels and on 26th July 153 students arrived to spend ten days learning Latin.  Nearly a quarter of these were from state-funded schools and we had our usual range of ages: from 14 to 58.  As the largest summer school ever we were also the largest group of tutors ever.  As usual we had a mixture of veterans and ‘newbies’:  Luke Bastin, Will Ford, Lindsay Harris, Ailsa McDermid, Francis McIvor, Sophia Potter and Sara Ward (nee. Brankin) all returned as gluttons for punishment and we were very fortunate in all the new members of the summer school team: Andrew Christie, Abigail Buglass Julia Eastwood, Joe Hytner, Sarah Mereli, Elly Nicoll and David Moyes.  Last year’s directors’ assistant Charlie Paterson, having finished Oxford, returned to teach before starting his Classics PGCE at Cambridge.  Charlie Coulthard, an ex-pupil from Norwich School, who is now studying Latin and French at St. Andrews, was this year’s assistant and she did a fantastic job – most notably she found the switch for the stage lights in Ritchie Hall, which meant that we had a proper stage for the staff play!

‘I not only learnt lots, but also made loads of new friends – even if I did end up pronouncing ‘Vs as Ws’

The format of the summer school remains generally very consistent.  Through a combination of lessons, grammar clinics and lectures the students receive an intensive but rewarding experience, which enables them to make considerable progress in both their knowledge of Latin and Roman society.  It being the largest summer school we had more teaching groups than ever before.  There were 16 altogether, including 4 groups for beginners and 5 groups for post-A Level.  We have continued the tradition of dividing the grammar clinics into ‘Basic’ and ‘Advanced’ and they were well attended throughout the ten days.

The schedule of lectures was as varied as ever this year.  Once again Anthony Bowen started off the programme with his ever-popular lecture on The Sound of Latin.  The following night Dr. Llewelyn Morgan delivered Palaces, Shpalaces:  the Most Important Hill in Rome.  Professor Matthew Leigh discussed Aeneid 6 and Becoming a Roman on the Thursday evening.  Both Llewelyn and Matthew were also kind enough to talk to those interested in reading Classics at Oxford and their continued friendship and support of the Latin summer school is very much appreciated.  On Friday evening we enjoyed a lecture from Dr. Joanna Paul on Classics in the Movies and once again on the Sunday we took two coach loads of eager Latinists to Caerleon and Caerwent.  That evening, Ailsa McDermid delivered a characteristically thought provoking talk on Roman religion: Doubting the gods: ancient agnostics and ancient atheists?

Once again the Hellenic Book Service arrived on the Monday morning of the summer school and all of our students made the most of the opportunity to not only buy a selection of classical texts but also pencils and badges inscribed with slogans such as ‘Melissa Grumionem delectat’.  On Monday evening Stephen Bird, the Head of Heritage Services at Bath, prepared us once again for our visit to the baths at Aquae Sulis on the Tuesday evening.  His lecture on the Baths and Temples of Aquae Sulis was as entertaining and informative as ever.  We are very grateful to Stephen and all he does for the summer school not only in preparation for our visit to Bath but also during the visit itself.  Once again the last night of the summer school saw, what is for many, the highlight of the course.  To an audience bedecked in classically themed costumes, the staff performed The Swaggering Soldier again (we broke with tradition and performed this two years running because David enjoys playing Miles Gloriosus so much and had specially bought himself a replica Roman Lorica Segmentata for the part).  As usual the play was received with a combination of derision, mirth and toe-curling embarrassment and at times it seemed as if the tutors enjoyed performing it far more than the audience enjoyed watching it!

Thank you to all who made the 2010 Latin Summer School a success, hopefully see you all next year.

‘We wanted to tell you what a big success the Latin camp was for our daughter. She was all smiles when we collected her at Wells Cathedral. It was clear that she enjoyed the program and that she made a number of friends.  We are grateful to you for taking her on

and we won’t be at all surprised if she decides to attend the program again next summer.’ 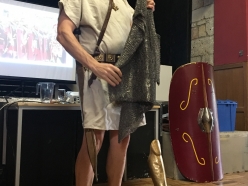 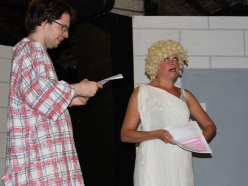 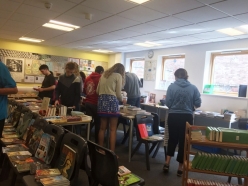 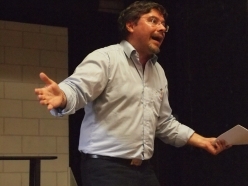