‘I cannot sing its praises enough …  everyone was really open and it was very easy to ask people for help if I was stuck on something or to go over a certain point when I didn’t quite understand.  The grammar and drop in clinics were so helpful and I think they are such a great aspect of the camp, as were the lectures, which were very interesting! …  After only 12 days I know that I have learnt an incredible amount of Latin …  The atmosphere of the school was lovely! The work is really hard but I had such a great time in all of my downtime. I have met so many amazing, interesting, intelligent and like-minded people and I have definitely made some strong friends for life. Whenever I felt that the work was a bit too hard for me there was always someone to help me work through it, be it a friend or a teacher and I never felt that I couldn’t cope with the work load despite the work being challenging.‘

The 34th Latin summer school once again took place at Wells Cathedral School, Somerset.  This year 122 students attended the two week course, making us the fourth biggest ever.  Our traditional spread of ages continued, with the youngest being 14 and the oldest being 65.  The summer school continues to have an international flavour with students from Geneva, Prague, San Francisco and Mumbai.  This year a third of our school age students were from the state sector, reflecting that interest in Latin does lie outside independent schools.  We also continue to appeal to and provide for mature students studying at undergraduate and postgraduate level.  This year 30% of our students were either at university or learning Latin as adults.

‘The Latin Camp gave me a chance to read rather large portions of original texts (and made me to do it in a rather short time), and familiarize myself with peculiarities of different authors’ styles, which I value especially in the case of Tacitus, who sometimes seems to be impenetrable without a guidance of someone more experienced. I learnt a lot of useful grammar details and new words.’ (Vaclav Horky, Age 19)

Once again the success of the summer school is reliant on the quality of its tutors and we were pleased that so many experienced tutors decided to join us again this summer:  Charlie Paterson, David Moyes, Luke Bastin, Lindsey Cullen, Laura Snook, Robert Grant and Olivia Upchurch.  It is important to mix the old with the new and we continue to regularly ‘refresh’ our tutoring team.  We were delighted to invite Rhiannon Litterick and Georgina Besent to join us; both of whom were graduates of last year’s new ‘PGCE’ group (more on developments in this area will be mentioned later).  Ian Goh (lecturer in Latin literature and language at Manchester University) joined us for the first time as did Juliet Brown.  Emily Strang returned as Directors’ Assistant and made sure that everything ran smoothly.  It will never cease to amaze me the breadth and variety of challenges faced by a summer school assistant; Emily faced each one with her usual combination of humour and efficient determination.

‘The JACT Latin Summer School has been a great experience and I have found it thoroughly worthwhile. I am leaving it feeling ten times more confident in my own Latin abilities, and also in my readiness to tackle and teach set-texts. The best thing about the summer school was being put in teaching groups with other PGCEs in a similar position, and having our tutoring tailored to our needs as trainee teachers. We have looked at all the GCSE and A Level set texts together, which has been brilliant; I now feel confident that I know these texts well and will be able to teach them without any trepidation. The contacts I have made with the other new Classics teachers have been incredibly useful and I am sure we will be in touch for many years to come.‘

This year we had 13 teaching groups.  Once again we had three beginners groups, and it was very pleasing to have so many school age students who wanted to take up Latin.  We once again catered for those who needed to learn Latin as a condition of their Oxbridge offers.

‘I was suprised that after only two weeks of Latin I achieved an A* in a GCSE past paper which goes to show that the tuition was of the highest standard, providing me with a strong basis in the language before I go on to study Classics at King’s College London in September.‘

Unusually this year we did not have a ‘Post-Beginners’ group but instead had a more advanced group made up of people who were either a little rusty or self-taught.  I am sure the selections from Pliny’s letters, and selections from Metamorphoses I and Aeneid II helped to refresh and develop their translation skills.  Our ‘Pre-GCSE’ demographic continues to grow and I hope that the summer school has not only helped them to make a flying start to their final year of the GCSE course but also encouraged them to take up the subject at A Level.  Our two ‘Post-GCSE’ groups covered a fantastic variety of texts (Pro Roscio, Metamorphoses I, Ecologue X, and selections from Catullus) which will hopefully give breadth to their Latin reading.  The ‘Post-AS’ age group continues to be our largest and they also covered an impressive amount of literature, with one group focusing specifically on Neronian literature by reading: Lucan’s De Bello Civili VII, selections from Seneca’s Epistulae Morales, Tacitus Annales XIV 1-10 and Suetonius Nero 26-38.Last year we introduced a group aimed specifically at those who were going into Classics teaching and we were thrilled to be able to expand this provision to two groups this year.  The aim of these groups is to provide not only a chance to look at the set texts specified by the exam boards but also to look at some of the different approaches to teaching Classics.  More information on this specific course can be found in the forthcoming issue of JCT and on our website.  Schemes of work for all teaching groups will also shortly appear on our website – follow us on Twitter and you’ll know when!   The grammar clinics were once again divided into ‘Regular’ and ‘Advanced’ and were organised in an order and format which would help as many students as possible.  Whilst we are predominantly a summer school which focuses on the reading of Latin texts, we are constantly revising how we can help to improve and support understanding of key grammatical concepts.

‘The 2014 Latin Camp has been one of the most rewarding experiences of my education. I have been submerged into the language with no prior experience and found it to be an extremely effective course. In the beginners’ class I had to keep up with a very demanding amount of work, both in and out of class. At first it was quite worrying but after the first few days I felt I could manage it. My tutor Georgina created a learning environment in which I was completely comfortable to approach tasks, regardless of how difficult they may be. Most importantly, while there was a lot or material taught, all of it was understood and my level of Latin has greatly improved. This course gave me a much stronger appreciation for Latin as a discipline and I would love to come again.’

We were very lucky to welcome back so many familiar faces for the series of evening lectures.  In keeping with tradition, Anthony Bowen gave the first talk and taught us how to pronounce Latin properly.  Tuesday night is now ‘Quiz Night’ on the summer school and gave the students another opportunity to meet people outside of their teaching groups.  This year, just as Apollo returns to Delphi, so did Professor Matthew Leigh return to us to give a lecture on Virgil with a particular focus on its historical context.  Dr Llewellyn Morgan discussed Stuff the Romans didn’t know, but really should have, a talk which raised some interesting questions on whether accurate geographical knowledge is necessary for world domination. On Sunday evening, Dr John Smith once again provided us with a fascinating insight into the life of a Roman Legionary in south west England.  This talk once again provided an opportunity to develop further the understanding of the Roman army in Britain gained on the trip to Caerleon and Caerwent.  Stephen Bird prepared us for our trip to Bath with a talk on Aquae Sulis and as always his support was vital to the success of the trip itself.  The museum at Bath continues to update its exhibitions regularly and some of us were privileged enough to gain a sneaky preview of some exciting new developments.  In the second week, Amy Coker returned to explain to us why Roman comedy is funny, using rather embarrassing images of previous productions of the summer school plays to illustrate her points.  We were very lucky to have Mark Grant not only give up his time to provide two Roman cookery sessions but he also gave a talk on Roman cookery in the evening.  On the Saturday we held a classical drama workshop and the Hellenic Bookservice joined us for a few days.  Many students took the opportunity to stock up on ‘Grumio ancillam delectat‘ pencils and to browse their extensive stock of first and second hand books.  The Latin Summer School would not be the Latin Summer School without the staff play at the end of the two weeks.  This year we introduced the publication of a programme (complete with cast biographies) and as a result the audience laughed a little more genuinely as the plot synopsis helped them to actually understand what was going on.

‘…the lecture about Roman army was really interesting and sent away my illusions about how Roman soldiers may have looked like. Also, I enjoyed much the trips that were organised during Summer School, especially the trip to Bath because we do not have remains of the Roman Empire like these in our country.’

This year we awarded £2800 in a total of 8 bursaries.  It is very important to us that we make the summer school and the learning of Latin as accessible as possible.  The comments quoted throughout this report are all from those who received bursaries and the financial support is clearly appreciated by those who received it.

The sponsorship we are so generously given by those listed below not only allows us to provide places to those who would not be able to come otherwise but it also helps us keep fees down overall.  David and I would like to thank those sponsors whose generosity helps makes this possible:

The website www.latincamp.co.uk continues to be the first point of contact for those who wish to apply using the online application process.

If you need further information after looking on the website or have specific questions to ask, then please do email me on aboyt@norwich-school.org.uk

Dates and course fees for the 35th JACT Latin Summer School will be published on the website and circulated shortly. 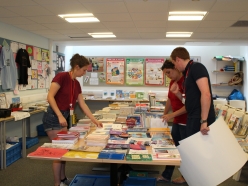